What is a Wage and Welfare Bond?

Wage and welfare bonds are required by unions that negotiate collective bargaining agreements with companies.  The bond assures that the employer will pay all union dues, fund contributions, as well as benefit package promises to employees that are union members. If the company is unable to uphold its obligations, then the union can make a claim on the bond and use it to pay for wages, friend benefits, salaries, or other compensation to the employees (or benefit plans or trusts).  What is a Union Bond? It's another name for a Union Wage and Welfare Bond. They are also called Union Wage Fund Bonds, Union Wage and Fringe Benefits Bonds, and Union Welfare Bonds. 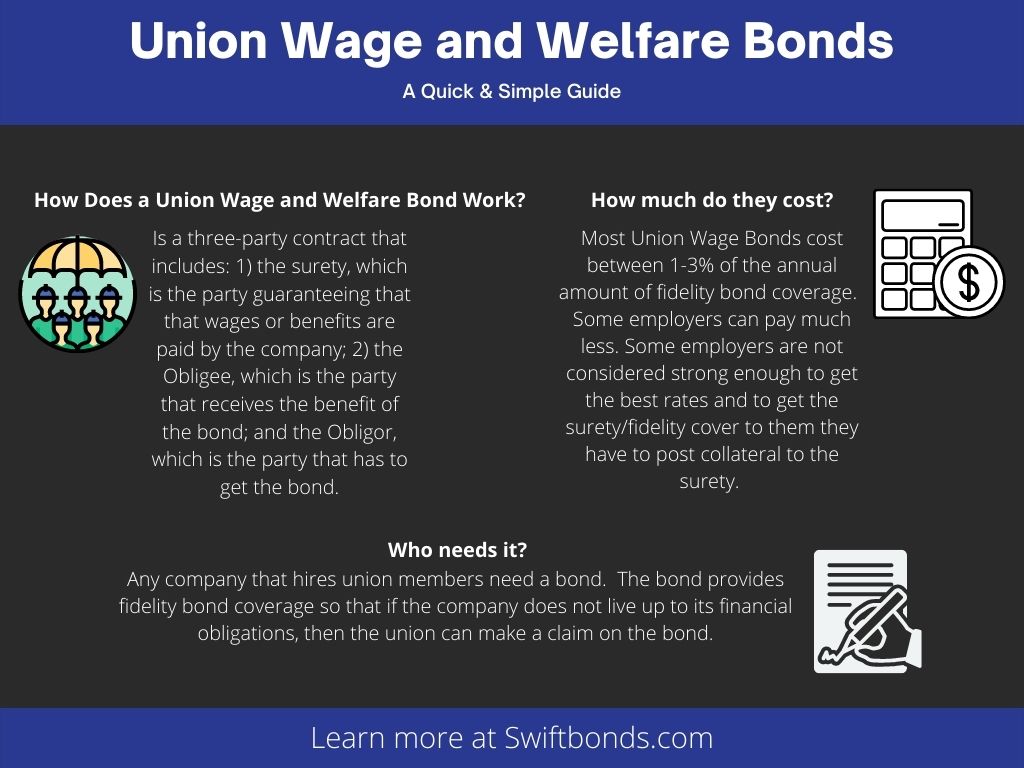 How Does a Union Wage and Welfare Bond Work?

Who Needs a Wage and Welfare Bond?

Any company that hires union members need a bond.  The bond provides fidelity bond coverage so that if the company does not live up to its financial obligations, then the union can make a claim on the bond.  Essentially, it's a financial guarantee, or employee fidelity insurance, that benefits the members of a union.

How much Does a Wage and Welfare Bond Cost?

Most Union Wage Bonds cost between 1-3% of the annual amount of fidelity bond coverage.  Some employers can pay much less. Some employers are not considered strong enough to get the best rates and to get the surety/fidelity cover to them they have to post collateral to the surety. The requirements for being bondable depend on the financial stability of the employer, the number of bonds being needed, and any previous employee dishonesty bond claims.

What are the Bonding Requirements for Union Wage & Welfare Bonds?

The Labor-Management Reporting and Disclosure Act of 1959 (LMRDA), which applies to labor unions that represent US Postal Service employees and that have private sector employees.  The Civil Service Reform Act (CSRA) applies to unions that work with employees that work in the Federal Government’s executive branch.

There are conduct provisions within the CSRA that utilize many of the LMRDA regulations, which includes the bond requirements for employees and labor union officers.

The goal of the LMRDA is to protect the assets and funds of the labor union from any improper uses or losses by its officers and employees.  Specifically, Section 502(a) of the LMRDA has a fidelity bond requirement to protect against these losses.

These types of bonds are called fidelity bonds (also referred to as fidelity bond insurance, or fidelity bond coverage).  Essentially, it’s a dishonesty bond, which protects the labor union from losses that occur through fraud, dishonesty, or other misuse of the union funds.

The LMRDA in Section 502(a) provides that “every officer, agent, shop steward, or other representative or employee of any labor organization (other than a labor organization whose property and annual financial receipts do not exceed $5,000 in value), or a trust in which a labor organization is interested, who handles funds or other property thereof shall be bonded to provide protection against loss by reason of acts of fraud or dishonesty on his part….”

Here are some definitions that relate to the fidelity bond coverage under the LMRDA.

A bond is a three-party agreement that guarantees that the surety will pay the Obligee (the party receiving the benefit of the bond) due to actions of the Obligor (the employee being bonded). This fidelity bond protects the financial wellbeing of unions and related companies. Under the LMRDA, fidelity bond insurance protects unions from financial losses caused by dishonest acts of fraud through its employees, representatives, and officers.

A labor organization can include a trust in which it has an interest.  This is defined as any fund, organization or trust that:

Property of the Trust

The property of a trust can include such things as bank accounts, cash, check, government bonds, mutual funds, stocks, cash, and certificates of deposit (CDs). In addition, property that is held for possible conversion into one of the items above would be included, but not things such as real property, buildings, office equipment, or office fixtures.

Handling of Union Funds Under a Wage Bond

Individuals are deemed to handle funds of a union if the union could potentially suffer losses due to fraudulent or dishonest performance by the employee. It is not required that the employee have physical contact with money, but also is based on various factors, including allowing others access where they could misappropriate funds.  This typically includes union officers, professional staff, administrative staff, trustees, business agents, and even clerical staff.

Fortunately, labor union bonds are only required to protect against financial losses through dishonest or fraudulent acts, such as theft, larceny, forgery, embezzlement, conversion, and willful misapplication. The union wage & welfare bonds must provide financial restitution from losses that result from the actions of bonded persons.

Who Needs a Fidelity Bond? 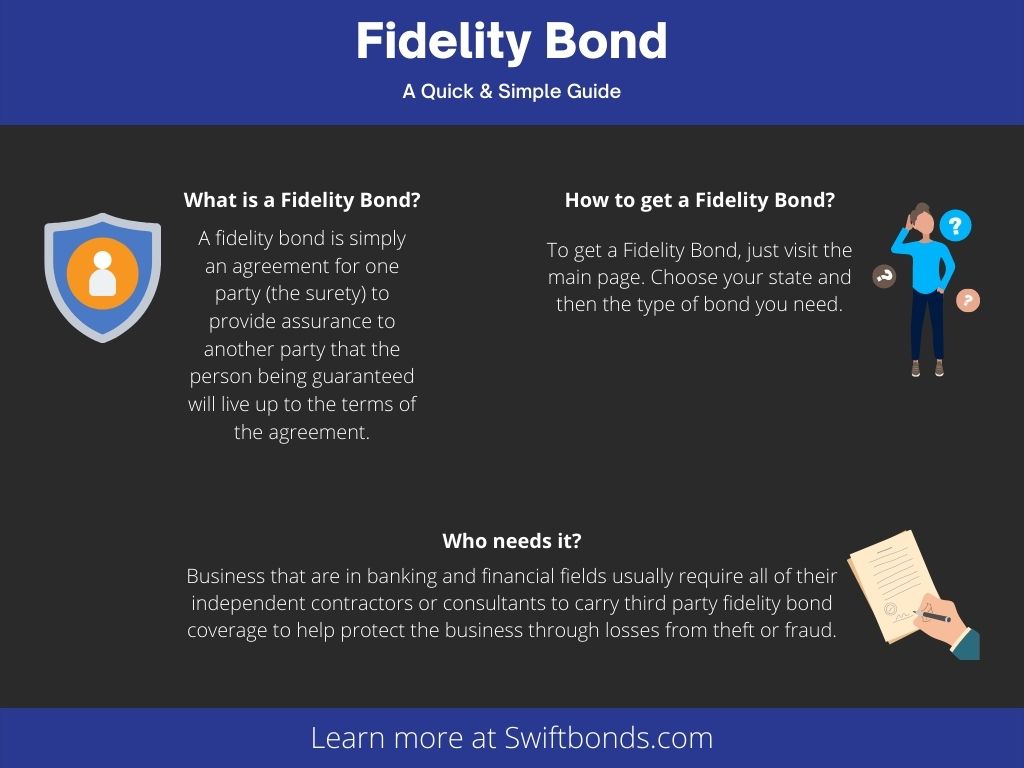 The LMRDA requires that unions must get a bond, unless their yearly receipts are less than $5,000.  All trusts in which the union has an interest requires a union fidelity bond.

The National Association of Letter Carriers have a specific bond form that they need to complete.  See the chart above for the NALC bond form by size.

All officers, shop stewards, agents, employees and other representatives who handle property or funds of a covered trust or union need to have a bond.  The bonded employee requirements include:

A bond is required prior to any new officers or employees handling funds.  The rules require that they have a bond that protects the union in an amount based of the value handled by their predecessors in the prior fiscal year.

What is the Required Amount of the Fidelity Bond?

See the calculations below to get a precise number

The minimum amount required for an employee or covered officer is equal to ten (10%) percent of the funds determined from the preceding fiscal year. If it’s a new union, the floor is $1,000 for union considered a local union, and $10,000 for a trust or larger unions.

The maximum bond that is needed for a single person for a trust or union is $500,000. Please note that if someone handles funds for more than one trust or union then they will likely need $500,000 in bonding for each trust or union.

How to Calculate the Bond Amount

The formula determining the bond amount is:

How to get a Labor Union Bond

We utilize only surety bond companies that are listed on the Department of the Treasury’s list of approved surety companies.

Further, bonds cannot use agencies that have a direct or indirect interest or relationship in the union.  We only do surety bonds and have no such conflicts.

What about a Union being Self-Insured?

Unfortunately, the union cannot be self-insured.  The LMRDA requires an actual bond.  Further, a union cannot deposit its funds to pay for any losses or provide protection against losses.  Finally, there is no deductible with regard to this type of bond.

There are blanket bonds, individual bonds, and schedule bonds.

It is possible to get coverage for more than one union on a single bond.  The bond must allow for each union to be able to recover an amount equal to or greater than what they would have if they applied on a single bond.

Revisions to an Existing Bond

Most sureties will revise a bond through a “Rider,” which is an amendment that updates the terms of a bond.  The rider can update the bond coverage to make it confirm to changes in laws, revise the people covered, change the amount of coverage, or add additional lines of coverage.

Paying for a Wage Bond

There are no rules around which party must pay for the bond. The only rules are around the requirement that there is not a deductible.

How to Report your Union Wage & Welfare Bond

Unions indicate on using the annual report (Forms LM-2, LM-3, or LM-4) that they file whether they had a fidelity bond and the maximum recoverable amount for losses incurred. If there is any loss, or other malfeasance that was discovered, that must also be reported.

All surety bond companies that have fidelity bonds covered by ERISA or the LRMDA file an annual report (Form S-1) that discloses the losses with regarding to the covered period.

Where to File your Labor Union Bond Report

Reports are filed with the Department of Labor:

Manage Cookie Consent
To provide the best experiences, we use technologies like cookies to store and/or access device information. Consenting to these technologies will allow us to process data such as browsing behavior or unique IDs on this site. Not consenting or withdrawing consent, may adversely affect certain features and functions.
Manage options Manage services Manage vendors Read more about these purposes
View preferences
{title} {title} {title}
x