St. Louis Treasurer – The case of no bond

Below is close to a made-up article.  I wish I could believe that it was not true or somehow otherwise unbelievable. Unfortunately, after being in this industry for years, it's actually easy to believe the article and how it describes that the East St. Louis treasurer's office did not have a performance bond (or any other type of fidelity bond).

What happened is that East St. Louis treasurer Joe Lewis Jr. just never filed the fidelity bond with the city.  It appears that this bond was requested at the beginning of Mr. Lewis' term, but that he never filed it.  There is a question as to whether he could actually get a bond or whether he just forgot.

The real lesson here is that if you are an Obligee, you need to make sure that you are protected.

The East St. Louis city treasurer’s office operated for six years without a safeguard for the public required under Illinois law — a performance or surety bond.

Former City Treasurer Joe W. Lewis Jr., who lost in the April 7 election, never filed the required bond with the city, according to a written statement from City Clerk Dorene Hoosman.

Asked whether he remembered either bringing a bond to the city clerk’s office or mailing a copy during his tenure as treasurer, Lewis said, “You would think I would remember that, but I don’t.”

Lewis was unable to provide copies of his bond, which must be renewed each year and filed with the city clerk. Although required by state law, failure to file a bond is not a criminal offense. Civil penalties can include loss of the office. 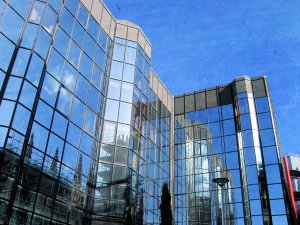 The current treasurer, Charlotte Moore, filed a $2.4 million bond with Hoosman shortly after taking office in May. Hoosman provided a copy of the bond on file to a BND reporter.

An annual bond is required under the state Official Bond Act to protect citizens against loss through the operation of the treasurer’s office, which regularly handles large amounts of cash. A bond is written assurance from an underwriter, usually an insurance company, that the public will be paid even if funds are lost through theft, fraud or mismanagement. Mayors and clerks must also post bond, but in much smaller amounts.

Reasons for why a bond might not be issued to a public official include financial judgments or a poor credit rating, according to several websites.

During the recent election campaign in March, Moore, Lewis’ opponent in the treasurer’s race, wrote to Hoosman asking whether Lewis had filed a bond. Hoosman replied, “I would like to inform you that the city treasurer bond is not filed with the city clerk. I have no record of any bonds of the city treasurer.”

Lewis was appointed treasurer in March 2009 and held the office until he was defeated earlier this year. Hoosman pointed out that bonds for Moore, who had previously held the office for more than two decades, still were on record in the clerk’s office.

If a bond is not filed within 10 days of taking office, the public office is considered to be vacant, according to the statute. The law is unclear, however, whether it requires that bonds also must be filed with the circuit court and reviewed twice a year by a judge. St. Clair County Chief Judge John Baricevic said he has interpreted the bonding law to mean that he is only required to review bonds of county employees and officials, not municipal officeholders.

Alissandra Calderon, a spokeswoman for the Illinois Department of Insurance, said her office does not keep track of performance or surety bonds of public officials.

In an interview, Lewis produced what appeared to be three applications for bonds from a company that stated a bond would be issued in 2009, when he was appointed to office. The documents referred to three, one-year bonds of $1 million each, one for the treasurer and one each for the police and firefighter pension boards that the treasurer oversees.

However, Lewis would not provide copies to a reporter. When asked whether he believed he was bonded during his tenure as city treasurer, Lewis said, “I’m not trying to hide anything. I just don’t know. But I can assure you we accounted for every dime that came into the office.”

Lewis remains the treasurer of the Association of Public Treasurers of the United States and Canada. The organization’s president Matt Horning said Lewis is bonded with the association under a blanket insurance policy that covers all of the group’s officials.

The importance of the Illinois bond law lies in the potential loss of public funds, said a lawyer who specializes in municipal law.

“If the public, in any given instance, loses millions of dollars due to carelessness or fraud or something like that, most of these folks who hold the (treasurer’s) office have nothing near the assets that would be required to make the public whole... And so, these bonds are very important,” said Andrew Bequette, an attorney with the Urbana law firm of Beckett & Webber, P.C.

While no city funds are reported missing, the treasurer’s office was criticized in a recent audit for failing to adhere to state regulations requiring that daily receipts be deposited in a bank the next business day. Instead, it took up to nearly two weeks for some deposits to be made, according to the audit.

The audit also cited the treasurer for failing to rotate who actually carries cash deposits to a bank, another state requirement.

In December 2008, a few months before he assumed the treasurer’s office, a bank filed for foreclosure against the home of Lewis, his wife and two other relatives and a bank. Lewis said the foreclosure was not because of non-payment for the mortgage on his residence on Washington Place in East St. Louis, but resulted from a disagreement over a change in interest rates. The foreclosure has since been withdrawn and Lewis still resides in the home.

In 2012, while he was out of state on a trip, Lewis ordered the treasurer’s office shut down for two days, stating that the layoff of a staff employee left him without enough help. The city attorney filed an emergency action in St. Clair County Circuit Court and a judge ordered the office to reopen the following Monday.

In March 2013, Campbell LLC, a company owned by East St. Louis finance director Johnny Campbell, filed suit against Lewis for non-payment of a $7,200 loan made in 2009 that was supposed to be repaid in five months. Lewis said the delay in repayment was due to a “disagreement” with Campbell.

Asked about the loan, Campbell said Thursday, “He repaid it.”

Alvin Parks Jr., who was mayor during Lewis’ years as treasurer, said the City Council gave Lewis time to make adjustments to his finances so he could be bonded.

“I thought he was actually bonded,” said Parks. “I have a hard time believing he did not file a bond but I will defer to the record. Maybe I am wrong.”

Manage Cookie Consent
To provide the best experiences, we use technologies like cookies to store and/or access device information. Consenting to these technologies will allow us to process data such as browsing behavior or unique IDs on this site. Not consenting or withdrawing consent, may adversely affect certain features and functions.
Manage options Manage services Manage vendors Read more about these purposes
View preferences
{title} {title} {title}
x