What is a Distilled Spirits Bond (Alcohol Fuel Producer Bond)? 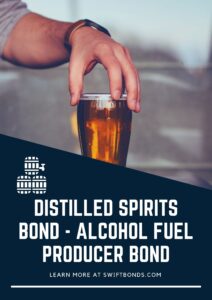 Distilled spirits are a type of alcoholic beverage that is made by distilling fermented grain mash or fruit. The process of distillation can result in either the production of alcohol, such as whiskey or brandy; or the production of ethyl alcohol, which may be used for fuel. Distilling was first done in antiquity and has been practiced throughout history to produce not only drinks but also medicines, perfumes, and other products. In some cultures distilled beverages were considered superior to non-distilled ones because they had higher concentrations of alcohol. Today there are many different types and brands available to consumers all over the world. To protect those consumers, in order for a production company to legally produce spirits and alcohol fuel, they will need a bond in order to protect their interests.

What are distilled spirits Bonds?

You should always be aware of the amount that you owe in taxes. For those who are unsure, a bond is an insurance agreement pledging security for payment of your tax liability which includes penalties and interest if they have become liable to pay it. A beverage DSP must provide a bond if: Your total tax liability on distilled spirits under one employer identification number (EIN) will exceed $50,000 this calendar year

What is a bonded winery?

There is a type of winery known as a bonded wine. These are ever so interesting because they have taken out an insurance policy to cover their excise tax liability with the federal government due to taxes. Usually when establishing itself with TTB (Alcohol and Tobacco Tax and Trade Bureau), it also has something called bond coverage – which comes in handy for all those taxes we know nothing about but everything will be okay if you're just bonding yourself together while making your own vintages here at home or anywhere else on the planet that would allow this activity without worry!

Is it legal to make whiskey at home for personal consumption?

It's illegal to distill alcohol in the entire US by federal law, and you'll be hit with federal charges if caught. The only thing that can legally be made at home is beer or wine; however, it must also meet certain requirements of wet counties for it to become legal-which makes brewing your own beer a bit challenging!

What is an alcohol fuel plant?

The TTB defines three sizes for Alcohol Fuels Plants: small, medium and large. Each has varying application requirements based on the plant's size.
Small plants produce 10,000 proof gallons or less of spirit per year and must comply with certain bond obligations to be considered an TTB-compliant facility. Medium plants operate at a higher production capacity than that of Small alcohol fuel plants but are still limited in their yearly output by not more times than 500 thousand proof gallons annually under this classification system as well as being subject to similar bonding restrictions like those imposed upon smaller operations; Large AFPs such as distilleries may have any annual output from 50 million up into 100 million plus without restriction.

In the United States, there are many federal agencies that regulate trade and commerce. One such agency is the Alcohol and Tobacco Tax Trade Bureau (TTB). The TTB regulates wine labeling and bonding requirements to ensure product safety for consumers. When a winery decides to issue a bond on their wines, they must first obtain approval from the TTB before issuing any bonds. A wine producer may provide either an irrevocable letter of credit or cash deposit as collateral to cover any excise tax liability that may arise in connection with their wines during storage periods. This blog post will discuss how producers can meet federal regulations by obtaining these bonds on their products.

Do I need a federal or state license to import wine and sell it to restaurants?

You need both a federal and state license to import wine. To get the “importer” basic permit, you have to provide a letter of intent from a foreign supplier for the purchase of wine. So basically you need find someone willing sell you wine (and put it in writing) before getting an importer's licence that'll allow your company to legally bring wines into this country on behalf of suppliers abroad who can't do so themselves because they're not U.S.-based companies or minors under 21 years old!

How much is a TTB bond?

When it comes to bonds, there are a few words you should know including premium and credit. When looking for the best bond option your options will vary depending on how good they look from an insurance standpoint which is determined by their credit score. In general, if someone has excellent or very good credit then one can expect rates of about 1% with premiums in between 0-2%. If somebody's not so great at managing finances but still wants something affordable however, any rate above 3% would be considered high risk while those below 4%, low risk.

What is a TTB bond?

A TTB bond is a guarantee that your company will pay the excise taxes to the federal government. It's essentially like insurance for those who are unsure of what they owe and don't want their business penalized if it turns out there was an error with tax reporting.

How do you become a bonded winery?

In order to become a bonded wine premise, one must first establish the premises and obtain a bond. To do this they need permission from the TTB (the Tax and Trade Bureau). The bond is basically an insurance policy that will cover excise tax liability due to the federal government should there be alcohol-related issues such as theft or contamination of spirits on site.

How does a wine bond work?

Wine in bond, or simply ‘in bond', are wines stored and held in bonded warehouses that have not passed through customs. Often wine brokers buy these types of wines because it saves them from the hassle of paying duty tax on their purchase if they're most likely going to be reselling.

Do I Need a TTB Bond?

Your federal basic distilled spirits plant, bonded winery, or brewery is the place where you can start your own craft alcohol empire. With a TTB permit in hand from this application process comes many opportunities for growth and success as well as plenty of responsibilities to maintain safety standards on an ongoing basis. The bond that’s required with each type of business entity has its limitations; however it also provides reassurance to those who may be considering investing time and money into one's enterprise while providing security against loss caused by theft or fraud during operation.

The FAA Act is a piece of legislation that governs wine production and distribution. The act provides for the regulation, control, or prohibition of wines containing an alcohol content by weight in excess of 14 percent; limiting to 18 years old the age at which any person may possess liquor (including malt beverages) as part-owner or lessee thereof; prohibiting importation into this country without permit from appropriate authorities under such laws applicable thereto and prescribing penalties with regard thereto. In addition to these requirements there are additional provisions relating principally but not exclusively to bonded wineries and bonded wine cellars planning on blending wines themselves who must also submit their own application along with basic permits for custom crush wholesalers applying within certain jurisdictions.

Federal Brewer's Bond-Pilot Brewing Plant
When the federal government began to require a $1,000 bond for each brewery in 1887, it was primarily an effort to curb fraud by breweries that would open up and then close without paying off their bonds. The brewing industry has changed significantly since that time – brewers now produce more than two billion barrels of beer annually and only three percent of those are brewed at small or regional breweries. With these changes in the market place, many people feel this requirement is outdated and should be eliminated; however, others have pointed out that this requirement still protects consumers from fraudulent businesses because most banks will not lend any money to start-up breweries if they do not already have collateral (or cash).

What is a Brewers bond?

Brewer's surety bonds are a type of liquor license bond that can be required by both the federal government and your state. The Alcohol and Tobacco Tax and Trade Bureau (TTB) requires this bond in order to approve your Brewer's Notice. A little-known fact is how these licenses, issued for breweries with production capabilities over 2 million barrels per year or 21+ million gallons, also require you sign off on an indemnity agreement which ensures those who suffer injury from any product made at the brewery will not sue them if they meet certain conditions laid out within it.

Do I need a brewer's bond?

Many brewers need a surety bond to ensure they will pay alcohol taxes. This is because the brewery represents beer wholesalers and retailers, who rely on those breweries for their business- this means that if something goes wrong with a brewer's operations, it can lead to disastrous consequences in terms of personnel layoffs or just lost profit due to reduced sales at retail outlets all over town.

Can you sell your home-brewed beer?

In order to sell beer in the United States, one needs a federal and state license for taxation purposes. This includes registration of your brewery with local building codes and environmental regulations before being able to produce any product that will be sold within the country’s borders. If you plan on creating canned or bottled products at home, labels must also go through pre-approval from both states as well as labeling requirements set by Alcohol Tobacco Tax & Trade Bureau (TTB) standards if they are going to be distributed nationally; this typically isn't something done unless it's professionally created beforehand.

What is a TTB brewer's notice?

The Brewer's Notice is a federal basic permit issued by the TTB that must be filed in order to qualify for brewing beer. This license grants breweries permission to sell their products commercially and allows them access privileges like carriage of goods across state borders, without paying duties or taxes on those items.

How do I get a brewer's notice?

If you want to start a brewery in the US, then your first step is submitting an application for approval with TTB. You can do this online or by mail-in paper form–but no matter how you decide to submit it there's not any cost at all!

If you're thinking about starting up a beer brewing business here in the United States and are wondering what steps need taken before beginning operation, we've got some good news: There's absolutely NO COST involved when applying for federal alcohol regulation with The Alcohol Tobacco Tax Trade Bureau (TTB). All of their forms process through its website like many other government agencies' services and they even have helpful video tutorials should anything be unclear during registration.

See more about Swiftbonds at our main page here.  We also have lots of information on other types of bonds, including performance bonds, bid bonds, and other contract bonds. Feel free to reach out to us with any questions.  We'd love to hear from you and help you out with all of your surety bond needs.